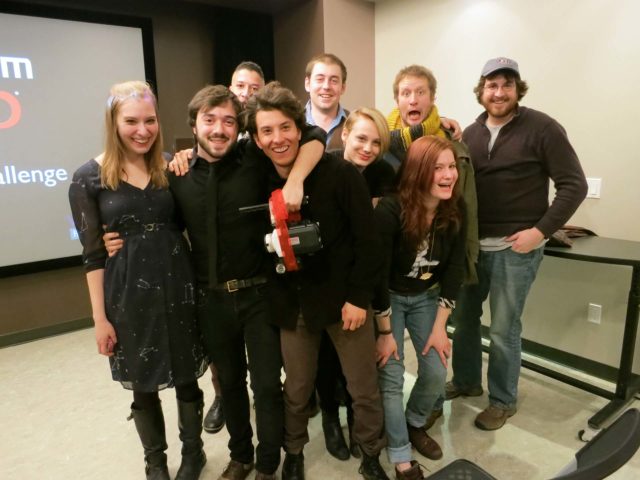 This being Award Season, the first Mo (Slow Motion) Awards were announced on Friday, March 1 at AbelCine in New York.

The Miro High-Speed Inspiration Challenge was hosted by AbelCine and Vision Research. Hundreds of submissions were reviewed and the most promising 5 were given the chance to shoot a short using a Phantom Miro M320S and complete lens/accessory package courtesy of AbelCine.

In his opening remarks, Moe Shore (possible relation to Mo Awards) pointed out that he was not going to describe the Miro’s 1540 maximum frame rate, 1100 ISO, 3 pound weight, or 1920x 1200 image resolution.

Writer/Director Robert Kolodny’s film “Fly on Out” was the winner, for which he received a Miro  M320S camera. He is pictured above, second from left, with crew and new camera.

Laura Egan won second place with “Anchor Me Here” about the effects of Hurricane Sandy..

Runners up for 3rd – 5th place were Peter Nelson’s “Dance of the Honey Bee,” Tim Wu and Natasha Kermani’s “A Closer Look,” and Nathan Pardee and Kristine Guzman’s “The Great Sundering.”