After NAB, the deluge. Our reviews and roundups begin.

They could rename NAB to NAV. “V” As in Viewing. NAB 2012 was not just a broadcast show. At least in the halls where I prowled. It was a Viewers and Viewing Show. On almost everything but traditional broadcasting: tablets, film, disc, drive, internet, computer screen, and phone. The final report from nab.org was, “NAB 2012 was the world’s largest electronic media show covering filmed entertainment and the development, management and delivery of content across all mediums (I like how the word “filmed” was included. Much better than the jargony “content creation” which makes me cringe–along with “workflow.”) NAB had more than 90,000 attendees from 151 countries and 1,500+ exhibitors, an almost 10 percent increase in size over last year. The event comprised 1,600 exhibitors spanning 815,000  square feet of exhibit space, up from 1,550 exhibitors occupying 745,000 square feet in 2011.” And not a single decent stadium-seating 4K theater on site or a fine place to lunch. (Wanted: good theater and well-catered lunch concessions–ideally outside, between Central and South Halls. IBC has its beach, along with rainy weather. NAB could have a beach, with lots of sunshine.) It was the NAV…er…NAB of 4K. With Sony 4K – 8K on one end of Central Hall, Canon 4K on the other, next to JVC 4K, and RED 4K – 6K in South Hall, the inevitable progression to a higher format well beyond HD was clear. What wasn’t clear was the writing on the wall, and on tablets, computer monitors, as well as cinema screens. Gorgeous 4K demos were shown at Sony, Band Pro, Canon, and elsewhere. Wealthy consumer 4K projectors were shown by Sony and RED. The revealing moment was behind black curtains in Canon’s booth on a prototype 30 inch monitor. As a Canon executive remarked, once you see it, you don’t want to go back. One wit observed it was like caffeine: once seen, you’re hooked. I’m drafting this post on an Apple 2K 30″ Cinema Display, which fine but fuzzy. Proofing is done on a higher rez printer. Canon’s 4K 30″ monitor will change all that. So will iPads and tablets, already higher rez than HD. There are a lot more forces driving 4K than just cinema. This was much more than a camera show. It was a storage and accessory show. The booths of Central Hall were festooned with bases, baseplates, rods, recorders, holders, mounts, shoulder pads, finders, handles, handgrips, bolts, boxes, wings, and things to make the cameras that were  in evidence practical for production. Although a camera was never invented that cinematographers didn’t feel compelled to retrofit, this year seemed to be an open-architecture manna-from-heaven annuity plan from the camera manufacturers to machinists everywhere. It makes sense. In the good old days (just a couple of years ago), high-end cameras were counted in the hundreds or, if lucky, thousands. High-end cameras now include DSLR cameras, and there are around 110 million of them, handled by 110 million users with different anatomies, ergonomic persuasions and styles of shooting. ARRI pretty much got it right with Alexa ergonomics, and so did the big surprise of the show: Blackmagic’s Cinema Camera, which Managing Director Grant Petty (above, with focus-puller Fauer) demonstrated with “man-up” handles. Anamorphic was big. ZEISS and ARRI showed anamorphic prototypes at their booths, with IBC planned for smaller and lighter models.

Vantage announced an arrangement with Cameron | Pace and announced “development of an anamorphic lens system that would set a future benchmark for anamorphic cinematography.” 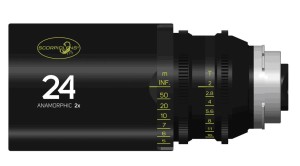 Servicevision showed plans for a large line of 13 compact and fast anamorphic lenses to be shown at IBC.

There were rumors, but no sightings, of a new Panavision digital camera, announced at Camerimage and expected by end of this year. Meanwhile, the huge inventory of Panavision anamorphics will fit Panavized Alexas–a simple procedure that involves unscrewing 8 screws on the existing PL mount and swapping it for a relatively inexpensive PV mount. That provides the keys to the kingdom of all the Panavision G, E, C, Primo and Zoom Anamorphic lenses.

And what about broadcast? In North Hall, we saw prototypes of tiny modules that attach to iPads and iPhones and receive full-motion television broadcasts over the air. This could be huge. With current terrestrial broadcast limited, shadowed by cable (which charges large sums for many channels which most people don’t watch), and fatigued by too many individual apps–is it possible we’ll go back to advertiser-supported free-over-the-air television? If so, I take back the renaming of NAB to NAV — and fully support the current acronym.